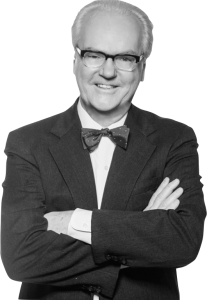 Thomas T. Tarbox was raised in a large family in Fort Dodge, Iowa, where his parents were civically active residents. Mr. Tarbox graduated from Creighton University in Omaha, Nebraska, majoring in political science and business. He earned a Juris Doctorate degree in 1979 from the University of Iowa College of Law and began his legal career.

Initially, he was a law clerk for the district court judges of the Second Judicial District of Iowa. In 1982 he joined the well- established Bennett Law Firm, and soon became a partner. During his tenure with the then Bennett, Wilke & Tarbox, Law Firm, Mr. Tarbox expanded his legal practice.

Mr. Tarbox’s wide expertise in Bankruptcy developed during his service as a Chapter 7 panel trustee for the U.S. Bankruptcy Court for the Northern District of Iowa.

In 1987 he moved to Des Moines. Mr. Tarbox was a shareholder in a major Des Moines law firm where he practiced in the areas of real estate, probate, estate planning, bankruptcy and elder law. In 2010 he formed a solo practice which is now the Law Office of Thomas T. Tarbox, P.C. As a solo practitioner he has continued to focus on the areas of probate, estate planning, elder law and bankruptcy.

He has gained prominence in the state, speaking at the annual meetings of the Iowa State Bar Association; and has been listed in Best Lawyers in America and Superlawyers in the area of Elder Law.

Mr. Tarbox has lectured at numerous professional seminars and conferences: Drake University Law School, the University of Iowa Probate Law Seminar, the Iowa State Bar Association, Iowa Arts Council, and the Iowa Museum Association. Mr. Tarbox is involved in area arts organizations including Friends of Drake Arts. He was a member of the Greater Des Moines Leadership Institute in the class of 1994-95.